Three types of mushrooms plus beta glucans have been shown to improve immune function.

Three types of mushrooms plus beta glucans have been shown to improve immune function.

Scientifically Reviewed By: Dr Gary Gonzalez, MD, on May 2021. Written By Ronnie Cortez.

Mushrooms have been used medicinally around the world for centuries.

They contain compounds called beta glucans that are responsible for many of their health benefits, including antiviral and immune-boosting effects.1-4

Studies of mushroom extracts and isolated beta glucans show that these nutrients can help bolster immune defenses against infectious diseases.

What Are Beta glucans? 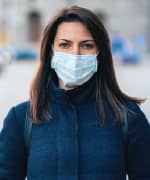 Beta glucans are a group of polysaccharides naturally occurring in cell walls of seaweed, whole grains, fungi, and mushrooms.

Mushrooms, yeast, and other fungi are particularly rich in beta glucans because their cell walls are made up primarily of these compounds.

Beta glucans can help nourish healthy gut bacteria and augment the action of immune cells throughout the body.5

There are thousands of species of mushrooms, and many have health benefits.

Three have been found to be particularly effective at supporting immune health. 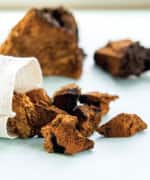 Shiitake mushrooms are a staple of East Asian cuisine and have long been used in traditional Chinese medicine.

In an animal model of severe bacterial lung infection, shiitake mushrooms significantly decreased the number of bacteria in the lungs and improved the animals’ condition.6

Other studies have shown antiviral effects against several types of viruses, both by directly inactivating them and by blocking viral replication.7-9

Shiitake mushrooms bolster immune defenses by increasing the number of immune system cells, including T-cells (which fight specific kinds of viruses) and natural killer (NK) cells (which can kill a wide variety of virally infected cells and tumors).10

Maitake mushrooms grow in various parts of the world and are commonly used in cuisine.

In preclinical studies, maitake was shown to activate immune cells such as NK cells and macrophages (which are among the first immune cells to fight an infection).11,12

Extracts of these mushrooms also induce the secretion of interferons, proteins that improve the body’s ability to defend against infection.12

Chaga mushrooms grow primarily on birch trees in cold climates, including in northern Europe, Asia, and North America. They are powerful immunomodulators.

In a study of mice treated with a drug that inhibits immune system activity, chaga extract returned levels of immune cells almost back to normal.13 It also kept down the levels of tumor necrosis factor, a marker of potentially harmful inflammation.

This mushroom has been shown in various preclinical studies to have antiviral activity against a wide range of viruses. These include various forms of influenza, herpes, hepatitis C, the human immunodeficiency virus (HIV), and others.14-16 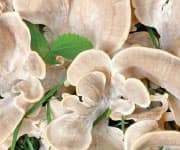 Mushrooms contain many different compounds. But when it comes to supporting the immune system beta glucans are considered their single most bioactive component.

These polysaccharide compounds can also be isolated from yeast.

They work by binding to receptors on an assortment of cells important for immunity.2,3 That activates pathways in the cells that boost their function and help them defend against infection and other threats.

Immune responses can be divided into two types:innate immunity and adaptive immunity.17

1. Innate immunity is the body’s first line of defense. It is comprised of sentinel cells that detect and attack a wide range of different viruses and pathogens. Cells of innate immunity include macrophages, neutrophils, NK cells, and others.

2. Adaptive immunity types are the “big guns” that are brought in later to fight off specific threats—a particular bacteria or virus, for example—once they have been identified. This also helps the body develop long-term immunity to a pathogen. The most important of these cell types are lymphocytes, including various B-cells and T-cells.

Beta glucans have a remarkable ability to activate and stimulate both innate and adaptive immunity.2,3,10,18,19

They can also help block dangerous inflammation. For example, endotoxin is a compound produced by disease-causing bacteria. Endotoxin is often used to induce excess, harmful inflammation in experimental animals. Beta glucans block this form of inflammation.20-22

WHAT YOU NEED TO KNOW

The Magic of Mushrooms

A healthy gut microbiota (the population of intestinal microorganisms) is also critical to optimal health and fighting infection.

In studies, beta glucans and mushrooms have been shown to encourage the growth of healthy microbiota.2,23-25 That’s because beta glucans serve as prebiotics, a source of nutrition for beneficial bacteria.2 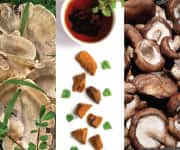 As we age, our immune system weakens, a process known as immunosenescence.30

With the deterioration of immune function, the elderly become more susceptible to infectious disease and cancer.

Studies in animal models of aging have shown that intake of beta glucans can help prevent or even reverse these age-related changes.18,31

One study on mice found that by enhancing immune-cell numbers and function, mushroom-derived beta glucans had a rejuvenating effect on immune system responses. They had a similar effect on the gut microbiota, reversing negative age-related changes.31

The effects of mushroom and beta glucans have on the immune system can help prevent and treat infection by a range of pathogens.

In animal models, beta-glucan use dramatically improves survival rates after infection by various bacteria and parasites.32-35

Even in cases of infection that are notoriously difficult to eradicate, beta glucans have shown great promise.

For example, in hepatitis B infection of the liver, the virus can actively suppress the body’s immune response. That leads to chronic infection that can destroy liver function. But in a mouse study, beta-glucans isolated from yeast helped the animals to recruit immune cells to the area and clear the virus.36

A number of benefits were observed, particularly in upper respiratory tract infections such as the common cold and flu.

Subjects receiving the beta glucans had:

One study looked at a non-infectious disorder: ragweed allergy. People suffering from this common allergy were randomized to receive either 250 mg of beta glucans or a placebo for four weeks.43

Those receiving beta glucans had significant reductions in total allergy symptoms and symptom severity. Measures of mood, energy, vigor, sleep, and overall quality of life were all improved as well.

This suggests that beta glucans can help improve immune responses not only to infection, but to other forms of inflammation as well. 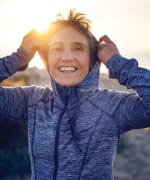 Various mushrooms have long been used for their medicinal properties.

Compounds contained in their cell walls, called beta glucans, are most responsible for these benefits.

A carefully formulated blend of beta glucans from yeast as well as shiitake, maitake, and chaga mushrooms can help support healthy immune function.

If you have any questions on the scientific content of this article, please call a Life Extension® Wellness Specialist at 1-866-864-3027.

Scientists continue to explore the multiple health benefits of mushrooms.

Researchers at Penn State University performed a systemic review and meta-analysis of observational studies published between 1966 and 2020.*

Data from more than 19,500 cancer patients was analyzed specifically for the connection between mushroom consumption and cancer risk. Researchers found that higher mushroom intake was associated with lower risk of cancer.

Further analysis showed that a higher intake of18 grams per day was associated with a 45% lower risk of total cancer compared to an intake of 0 grams per day.

When site-specific cancer was studied, a significant association was observed with breast cancer and mushroom consumption.

Mushrooms, which are low in calories, can be eaten raw as a healthy snack, mixed into a salad, or cooked into different dishes.44